Keep a firm grasp on angles and paths, even under the toughest conditions!

Safety guidelines for mobile machines and their requirements have been a major component in constructing new mobile machines, even before the introduction of EN ISO 13849. With the release of EN ISO 13849, many things have changed with regards to reliably recording angles and displacements. But new draft standards like EN 13000 for mobile cranes or EN 1175 for forklifts even go a step further, requiring additional measures. It’s not always possible to find a sensor on the market that fulfills the standard while also meeting requirements for robustness and long service life. What’s more, these sensors might not be available with the necessary flexibility in terms of interfaces or connection technology.

SIKO GmbH from Buchenbach, the German specialist producer of sensors for linear and rotary path and angle measurement, has developed a suitable product for the mobile machines market to solve this problem. With the new redundant absolute rotary encoder VW58MR, SIKO offers a rotary encoder that allows its customers to keep a firm grasp on angles and paths, even under the most extreme conditions. The rotary encoder has a category 2 construction, allowing it to be used up to SIL2 and Pld.

A real jack of all trades
The rotary encoder is based on robust magnetic scanning technology. The measurement range of 4096 revolutions (12-bit Multiturn) is broken into 16,384 steps (14-bit). SIKO uses a newly-developed and reliable gear to allow the Multiturn to capture information. In contrast to battery-powered or self-contained Multiturn technologies, it continues to reliably deliver position values for years to come. The two galvanically separated sensor units of the rotary encoder record positions entirely autonomously. Absolute position and speed are continuously provided to the controls through the interface. Customers can choose from three different versions of interface. In addition to a version with two separate CANopen interfaces, customers can also choose from a version with bus-in bus-out and two node IDs, and one which reliably transmits via CANopen Safety. This provides customers full flexibility, allowing them to adjust the encoder to their applications. Whether clients are interested in two separate CAN bus lines or in transmitting reliably through CANopen Safety, the WV58MR offers multiple options.

A hardcore encoder
The encoder is tough enough to handle even the most extreme environmental conditions. Extremely robust and resistant to environmental influences, it withstands the harshest weather conditions.  With protection class IP65/IP67, a wide temperature range of -40 °C to + 85 °C (-40 °F to 185 °F), and a special coating process, it is perfectly suited for mobile machines with tough demands. There is also a version available with a housing that is resistant to salt spray for use in harbor areas. Its especially strong double ball bearings mean high axial and radial loads on the shaft are no problem for this compact “hardcore encoder.”

The benefits are obvious. With the WV58MR, SIKO offers its customers a flexible rotary encoder solution that solves multiple problems at once. The encoder fulfills norm requirements, lessens environmental impact, and - thanks to its intelligent features - makes integration as efficient and simple as possible. A true advantage for machine manufacturers and users.
The WV58MR rotary encoder is a magnetic Safety rotary encoder with redundant position detection, custom-designed for use in mobile machines. It can be employed in safety-critical applications up to Performance Level PLd. Thanks to its particularly robust design of an optional redundant CANopen or CANopen Safety interface it is ideally suited for heavy-duty use in mobile machines.Combined with wire-actuated encoders, the WV58MR can als be used for reliable linear position monitoring. 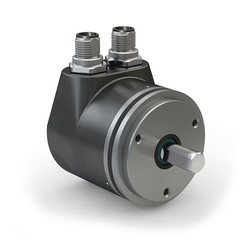